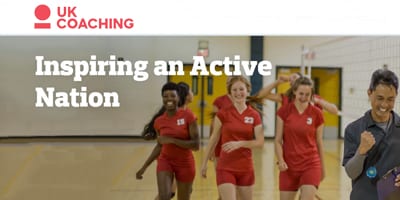 UK Coaching yesterday, 22 October, officially announced the finalists for the 2018 UK Coaching Awards, continuing the organisation’s celebration of great coaching, which commenced earlier this year with the UK’s first ever Coaching Week.

A judging panel, consisting of experts from the coaching, sport and physical activity sector, deliberated from a record amount of nominations to select 33 finalists across 11 categories, recognising their great coaching achievements over the last 12 months.

Hosted by UK Coaching, the showpiece annual event is seen as one of the most prestigious by the coaching community and will be held at The HAC, City of London on Thursday 29 November.

Awards for coaches – the following categories will be awarded to coaches:

Children’s Coach of the Year – supported by sportscotland

Community Coach of the Year

Disability Coach of the Year

High Performance Coach of the Year

Talent Development Coach of the Year

Transforming Coaching through Technology (new for 2018) – supported by Reading Room

Coach Developer of the Year

Coaching Culture Organisation of the Year

Coaching for an Active Life Award – supported by Sport England

New for 2018, the Great Coaching Moment of the Year celebrates a particular moment in time when a coach’s support and guidance really paid off. This award is open to a public vote, beginning on the 19 November and concluding on the night of the Awards.

UK Coaching will also recognise great coaching through The Coaching Chain, which recognises contributions made by individual coaches throughout an elite athlete’s life.

“Great coaching takes place across the UK every day and the UK Coaching Awards is our chance to formalise our recognition, congratulations and thanks to coaches for all their hard work.

Last year, over nine million adults received coaching in the UK, with the majority of participants enjoying a positive experience. To celebrate this, we hosted our first ever Coaching Week and got our great coaching message out to over 50million people across the UK. In the same week we launched our Principles of Great Coaching designed to help people recognise what great coaching looks like.

Fundamentally, coaches must put participant’s feelings, thoughts, ambitions and motivations at the heart of everything they do. The stories of these finalists certainly show that they live by this ethos. I am also buoyed by the strength and depth of the young finalists in our Young Coach of the Year category. The theme of our Coaching Conference this year was young people; and a call to ensure we as the coaching sector are providing great coaching to the next generation and supporting that very generation to become coaches themselves.

The UK Coaching Awards has been staged for over twenty years, and we are confident that this year will be the biggest celebration of great coaching yet, with new categories to reflect developments and incredible achievements over the past twelve months. Thank you to all those who took the time to nominate a coach and/or organisation. Best of luck to all our finalists, I look forward to celebrating with you in London.”

The principle of the Awards is to recognise and reward great coaching from people and organisations across the UK at all levels across sport and activity, from community to high performance.

Previous winners include coaches and organisations making a huge difference in their community as well as the coaching elite working across a wide variety of sports on the world stage.

Want to join the stars of the show? Tickets and table sales can be found via our website.