Setting up a Rounders Group helped me secure a future in football
June 06, 2018 - Posted by Rounders England in Case Studies - Our Sports Impact 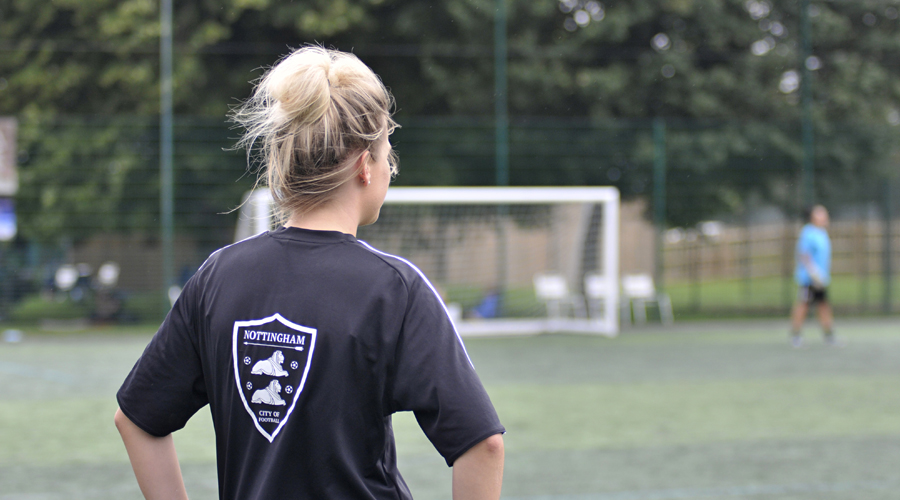 Katie Gibson would describe herself as ‘a keen all round sportsperson’, having played football from a young age. When it was her time to enter further education her natural course of choice was to study Sport and Special Inclusive Education.

As part of her academic studies and to give her an understanding of the sports development arena, she undertook a placement with Nottinghamshire County Council in the Sport Development team. She was tasked with setting up a Rounders league in Nottingham.

Katie’s role included founding a constitution for the development of Rounders within Nottinghamshire. She promoted the mixed league to local businesses, set up the business bank account, organised and ran the weekly rounders sessions; creating a fun, out-of-hours team building environment for corporate employees. She worked in partnership with Nottingham Trent University and Nu2 Sport (an initiative between University of Nottingham and Nottingham Trent University) to deliver and promote rounders to university students.

The league was first developed in Rushcliffe with numbers reaching 40 per week and then duplicated to other areas of Nottinghamshire and finally set up at Nottingham Trent University as a social rounders league. Over the past three years the South Notts Rounders Group has continued.

During her time at Sport Nottinghamshire, Katie was keen to strengthen herself as a member of the Workforce and obtained her UKCC Level 1 qualification in Rounders.

Setting up South Notts Rounders laid the foundations of Katie’s confidence to manage, organise and run programmes. As her passion was always football and she had noticed a gap in the market for a 5 a-side female only football league in Nottingham – she decided to put her newfound skills to good use. She created a robust and viable business model for Female Football Fives: a female only environment, for those aged 16+, to play non-competitive football. Marketing the project consisted of an appearance on BBC Nottingham Radio and the front page of the Nottingham Post. She forged partnerships with the FA, Nottingham City of Football, Sportivate and Football centres which resulted in sponsorship and extended opportunities. Katie is a Tour de Force and there are now weekly leagues of between 8-10 teams on a regular basis. The success of the project has spawned two annual Female Football Fives tournaments with over 160 females in attendance. Alongside these extra curricular activities, Katie was sustaining a full time career at Sport Notts as a Marketing and Communications officer.

Making an idea into reality is something that Katie has developed a passion for. From her first project, developing Sport Notts Rounders Group, to her current role with Nottingham City of Football. Her day involves working with inactive groups and changing/challenging their views of football. She works with Women & Girls, B.A.M.E groups and Disability groups, to drive more people into taking up football. Ultimately, setting up innovative programmes to attract target audiences.

Being tasked with setting up a Rounders league gave me so much experience and meant I was ready for the next step in my development and my career.