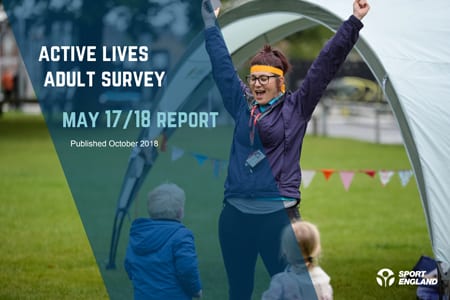 Sport England has today published the latest data from the Active Lives Survey, a comprehensive snapshot of the nation’s sport and physical activity habits, based on a sample of almost 185,000 respondents.

The results, spanning the period May 2017 – 2018, show that 297,400 more people (aged 16+) in England are sufficiently active to benefit their health, and meet the Chief Medical Officer’s guidelines of doing at least 150 minutes of moderate intensity activity each week. The benefits of activity at this level include a reduced risk of dementia, depression, diabetes and improved mental wellbeing.

Another positive aspect of the results is that 116,400 fewer people were inactive compared to the previous 12 months. Inactivity means doing less than 30 minutes of physical activity a week. The reduction was particularly noticeable in older adults (55-75 year olds), a key target group in Sport
England’s strategy.

Walking, both for leisure and travel, grew in popularity, with nearly 1 million more people walking at moderate intensity. Sport England has invested significantly in helping people get active outdoors through partnerships with the National Trust, the Forestry Commission, the RSPB, the Canal & River Trust, and in programmes like Beat the Street that turns towns and cities into a giant game to help
families get active.

Other activities that grew in popularity over the period were:

The positive trend in activity applies to men and women equally, but comparatively women are still significantly less likely to be active than men, with 14.2 million active men (16+) and 13.8 million active women (16+).

As expected, the extremely cold and wet weather in February, March and April had a significant impact on some outdoor sports, notably football and cycling. 303,800 fewer people cycled during the twelve-month period, with notable drops in participation between December and March.
Statistics from British Cycling indicate they had to cancel double the number of events during this period compared to the previous 12 months.

Football was also badly affected by the weather, with a reduction of 203,800 people playing football in the 12 months to May 2018. The FA reported 94,000 matches were cancelled this season, which meant the loss of over two million opportunities to play.

There was also a marked decline in swimming, with 360,400 fewer people taking part.

The bad weather brought good news for fans of winter sports as 29,400 more people took part, driven by an increase in the number of people sledding.

The survey also measures the number of people volunteering in sport and activity and showed there has been a significant decline in the last 12 months, with 400,500 fewer people volunteering at least twice a year in sport. There is a similar pattern across all sectors of volunteering, with numbers declining in many areas over the last 4 years.1

We are working hard to get more people active and harness the benefits that sport brings. Since we launched our sport strategy nearly half a million more people are active and, crucially, inactivity rates have begun to drop. This is an important step in the right direction, but there is more to be done.

People are turning to sports and activities that fit in with their lives – such as the gym, yoga, martial arts or even roller skating. Through Sport England, we are investing in initiatives that make it easier for people of all ages to get active and help us become a healthier nation.”

There are some positive results here in terms of more people getting active, and I am pleased that we are beginning to see a reduction in inactivity. It’s also very clear that the activity habits of the nation are changing, with people finding the activities that best suit them and their lives. The new patterns highlight the importance of Sport England’s partnerships with bodies like the National Trust, the RSPB, and the Forestry Commission to support more activity outdoors, and our work with Pubic Health England on training medical professionals to encourage people to get active in ways that will benefit their health.

We know that sport and physical activity can have a profound impact on physical and mental wellbeing, individual skills and confidence as well as building social capital and growing the economy. Our role is to help everyone regardless of age, background or ability to be active so that they can benefit from those outcomes.”

It is great that more people seem to be getting increasingly active - but there are still many who aren’t. Introducing physical activity into your life can start with a simple 10 minute brisk walk each day, which will improve your health and help you build your fitness and activity level."