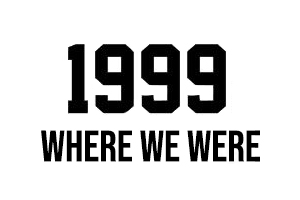 You may know, today, Tuesday 7th May 2019 marks the 20th anniversary of the appointment of Alison Howard to Rounder England as it’s first paid employee. The organisation has come a long way since then and we thought it would be fun to ask the rest of the team and Board what they were up to 20 years ago.

While some were studying or working their first job after university, others were embracing a toddlers life. Enjoy taking a look at what some of the current crop of Rounders England employees and board members were up to in 1999.

In 1999 I was in the first year of a relationship which has since developed into a happy marriage with brilliant and beautiful children. I was studying Sports Science (with Sports Injuries) at Stamford College in Lincolnshire with part time jobs in a gym and pub / nightclub. Life was good….but destined to get better.

In May 1999, I had just moved to London to embark on my career, following some travel around Australia & Thailand, post university. My first job in London was at King’s College London and I moved into a flat share in Wandsworth Common. Great times!

I was captain of mixed and ladies teams in the South Yorkshire Rounders League. I also payed netball for Travis Perkins. Sport was a big part of my life.

I wasn’t quite 16 but was looking forward to Sixth Form. I planned to study A-Levels at Ysgol Gyfun Rhydywaun. This picture is from my time there.

In 1999 I moved to Rotherham, bought my first car and joined the British Steel graduate training programme. British Steel promptly merged with Hoogovens starting my short-lived jet setting career in the Netherlands!

I had graduated from Queen Margaret University, Edinburgh, in 1998 and was in my first year of full-time employment. This photo was taken in the housing association flat I rented. Such was my dislike for the colour of the walls and carpet, I was very keen to get on the property ladder. I bought my first flat in the following 18 months.

20 years ago I ate a lot of ice-cream, played with toys and left my mum and dad to clean up the mess.

20 years ago I was playing for St Lukes Primary School Year 6 Rounders Team. My teacher was the first person to fully explain the rules and introduce me to tactics of the game. Little did I know, 20 years later, I’d be working with the experts who created those rules!

I was completing my PGCE (FAHE) at University of Wolverhampton, undertaking teaching practice and also wardening at Warwickshire College, Moreton Morrell. The picture is of me at the college’s Summer Ball 1999, before a night of celebration!