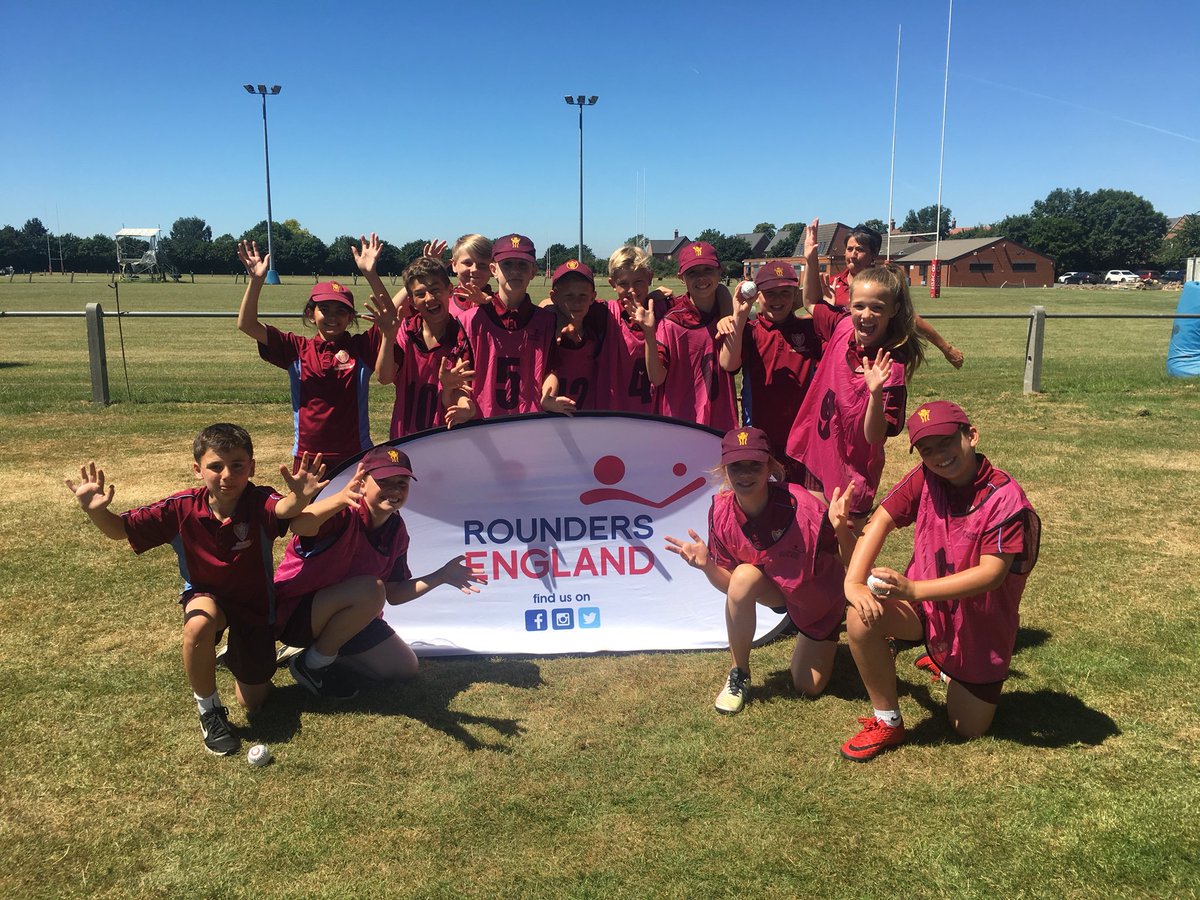 Round Robin
Overall winners of the day St Mary’s demonstrated from the outset that they were keen to win the championship title, having come so close in 2017. After a round robin and playing every school team, they went in to the semi final having narrowly lost two of their six matches.

New entrants to the competition St Anne’s Preparatory School, scored a respectable 28½ rounders over the duration of the day but only winning two of their six matches which demonstrates the quality of the skills and tactics on display from these young players.

Semi Finals
St Mary’s kicked off with a ½ rounder on ball two but then striking out and getting put out on the following 3 balls. With another 2 and a half rounders scored by ball 17 St Mary’s, last batter was struck out on ball 18.

Grantham tried in vain to emulate St Mary’s but only scored ½ rounder on ball 5. Unfortunately no one else managed to score and all their batters were put out by ball 18.

Hillborough and Hoe Bridge were fairly well matched in the semi finals. As winners of the round robin, Hoe Bridge had a mental advantage over Hillborough but first in to bat, Hillborough set the playing field with 3 rounders. Hoe Bridge, first batter out on the first good ball, simply couldn’t exert themselves over Hillborough, facing their competitors for the second time that day.

Finals
2017 runners up, St Mary’s, were determined to make 2018 their year in Rounders.

With Hillborough batting first, things were going in the right direction for St Mary’s, with the first batter getting put out on the first good ball. It took until the fifth ball for Hillborough to start collecting points with a ½ rounder being scored on a no ball. Having been beaten by St Mary’s in the round robin, Hillborough knew what they were up against, and working hard to score Rounders was failing against a strong fielding side from St Mary’s. Clearing 4½ rounders over the match, Hillborough had set the standard for St Mary’s.

Having won four of their six round robin matches, St Mary’s had a full day of honing their skills and tactics. Having made it to the final in 2017 and narrowly missing out by a ½ rounder, they were on a mission to take the title back to their school. By ball number three they had scored their first ½ rounder, followed swiftly by a Rounder. Player number four brought St Mary’s a lot of good luck. Presented with a good ball, on ball 20 they had scored their third consecutive Rounder, putting them on equal footing with Hillborough. All St Mary’s needed was a ½ rounder to win and that opportunity came in the next three bowls.

Contributed and written by team members from Shenfield St Mary’s

Everyone had mixed emotions on the way to participate in the Year 6 National Rounders competition. A few weeks earlier, Shenfield St Mary’s had placed 2nd in the Essex Rounders Competition, and this made us unsure of whether we could go all the way with such fierce competition.

We had a rocky start by losing our first game, but we proved we should have qualified for nationals by winning the next game. Having won, we went into our next match with high spirits. We lost this game by a slim half rounder, meaning we had to win all the rest of our matches to get to the quarter finals. We didn’t want to waste the amazing opportunity we were given ,and with this thought in mind we won the rest of our matches!

In the semi-finals our fielding was top-notch, leaving our opposition scoring just half rounder!

In the finals, we had a lot of pressure to win, as last year our school placed second! We put our all into this final game and this helped us to win. With Ben Rowbury scoring the final rounder with two balls to go, we were overjoyed to have won such an important competition. To say we are the best rounders team in England is an amazing feeling and we will never forget this remarkable experience!

On a final note we would like to thank Rounders England for putting together such an inspiring event!