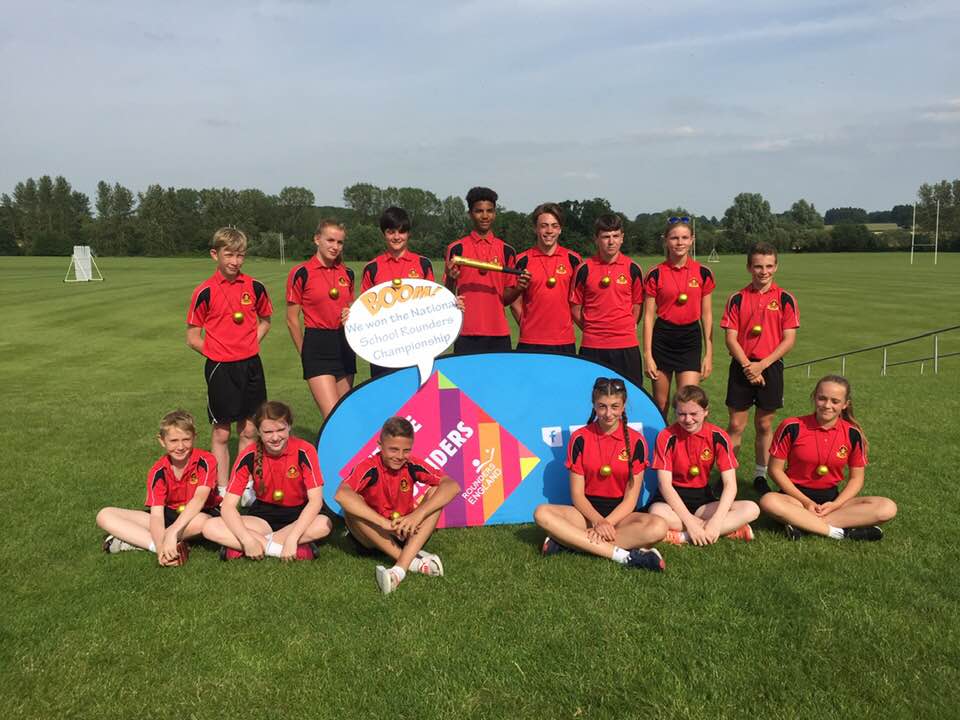 The success of the three competitions this year was bolstered by the fantastic weather and the amazing facilities. All three events were held at the University of Leicester, Oadby.

Overall, we welcomed 26 schools from as far away as Hartlepool to Oxford. Nine new member schools debuted at the 2019 competitions which covers three age groups.

Group Stages
In the group stages eight teams chased their dreams to take them into the quarter finals. With exceptional scoring from St Martin’s and Shenfield their journey to the finals seemed almost inevitable so early in the day.

Quarter Finals
On pitch one, 2018 winners, St Martin’s experienced 2 batters out in the first 3 good balls so the flow of game could well have been written off so early but St Martin took the lead by ball 13, accumulating 6½ Rounders by ball 18. Clyst Vale struggled to notch up a winning score in their 8 good balls, holding steady with 3½ Rounders at the end of their game.

Shenfield in to bat first, held a steady game racking up Rounders and ½ Rounders. With the final score at 6½ Rounders, Wath had to work hard to achieve the same. An eager first and second batter, scoring 3 batters between them , wasn’t followed through by the rest of the team, scoring 4 Rounders.

Saffron Walden and St Peters was a match of equals, both displaying strong tactical fielding and strategic batting. St Peters just grasping the win 9½ to 8½.

Ripon set the pace for their game as they built on half rounders, scoring 3½ at the end of their innings. With this haul, they were eager in their fielding and kept Royal School to 2½ Rounders.

Semi Finals
Both semi final games were well matched with both final scores coming in close.

Their penultimate match of the day was a close call for Shenfield against St Peters. Batting first Shenfield eluded the Wigan based fielding team and with some strong runners scored 7 Rounders. In to field St Peters showed the same stamina but only managing to steal 6 Rounders.

Ripon accrued 3 Rounders in their innings of 18 good balls but St Martin’s secured a ½ Rounder lead by their 5th good ball, calling the game to an end, and securing their place in the final.

Finals
A nail biting and tense last match of the day. Quality players throughout the day, both teams were worthy finalists. Shenfield gathered up 5½ Rounders from 4 of its players but more consistency from St Martin’s, meant that they accumulated 6 Rounders from 6 of its players, taking the national title on their 10th good ball and paving their way as winners again.

SAINTS RETAIN NATIONAL ROUNDERS TITLE
The St Martin’s School U14 mixed rounders team are finishing for the summer break on a high after being crowned national champions at this year’s national schools final in Leicester. It was a sense of déjà vu for Saints as they took the title for the second year running.

District Champions
Their journey to the final started back in May at the district round when Saints took on schools from the local Brentwood area. Saints stormed through the district round beating both Shenfield School and Anglo European School, 8½ -5 and 12-6 respectively.

County Champions
Superb team work in the field from Ed Walker and Elliott Jarvis and exceptional batting from Georgia and Holly Fredrickson secured straight wins against all of their opponents, earning Saints the title of county champions and a ticket to the national finals.

Having dominated both the district and county rounds the team travelled to the University of Leicester for the finals. The day-long tournament had schools competing from all over the country and started with group stages which Saints domineered.

Denham Minnor and Jasmin Sena’s teamwork as backstop and first base ensured any batsman missing Josh Kirby’s fast bowls would walk. Saints finished top of their group after beating all four schools in their group stage.

Saints fielded first in their semi finals against Ripon Grammar School from North Yorkshire and kept the opposition down to only 3 rounders. Saints batted well and the game was called after the 5th ball as Saints had exceeded the opponent’s total. Saints were jumping for joy after reaching the final for the second successive year. Saints won the toss in the final and fielded first and were chasing 5½ to take the title. The Hutton based team showed exceptional skill and faultless teamwork. With a potential 18 balls to bat St Martin’s were able to take the national title on the 10th ball.

“our team was made up of girls and boys from years seven to nine, each of whom played integral roles at different stages and rounds of the competition. Their commitment to training coupled with their desire to win made this a winning squad from the start. The standard of play was extremely high and we are so proud of their achievement.”